TN5’s Day Out At The Olympic Football

Yesterday Mr and Mrs Tnfive and the the little Tnfivers were lucky enough to go to The Olympics at Old Trafford to watch (among others) Team GB’s first match. We packed an array of GB supporters gear from flags to Union Jack earrings and set off for Manchester. It was a balmy 25 degrees as we crossed the Pennines and headed for the Olympic ‘Park and Ride’ near to Manchester City’s Etihad Stadium. After being greeted by the friendly and enthusiastic volunteers we boarded the bus with all the other excited families and headed off to Old Trafford. 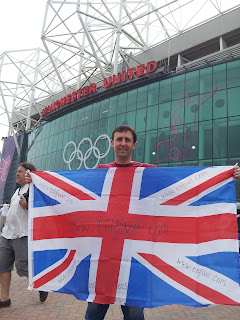 On arrival at Manchester United’s home ground, we quickly unfurled the flags (yes ok, you may have noticed there was a bit of shameless TN5 promotion going on!) and snapped some pre-match pictures of Mr Tnfive. It was great to see so many supporters from all around the globe coming together for a few hours of footballing entertainment. The sounds of different languages filled the air, German, Spanish, Arabic, French, this truly was an international event. People of all different nationalities queued up to have their photos taken in front of the Manchester United Trinity statue of George Best, Denis Law and Bobby Charlton, before joining the lines for the bag searches. 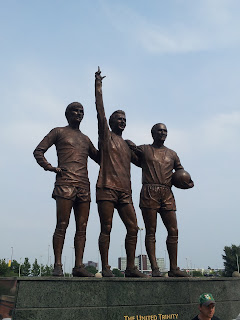 Once through security we made our way to our seats in the Family Stand. They were absolutely fantastic – right above the tunnel for a cracking view of the players coming on to the pitch. Considering we only paid £57 for all four of us it was quite possibly the bargain of the century!

The opening game was UAE Vs Uruguay. Considering it wasn’t the main reason for going, the atmosphere was great and the two teams served up a treat of football. UAE played with flair and inventiveness, getting their reward midway through the first half when a great through ball was calmly finished. Cue the comeback! Just before half time Uruguay equalised with a great free kick and went ahead just after the break with another good goal. Both teams continued to search for more goals, but UAE couldn’t quite get back on level terms despite the support of the crowd. Suarez got some stick - booed EVERY time he went near the ball. It was like a pantomime! 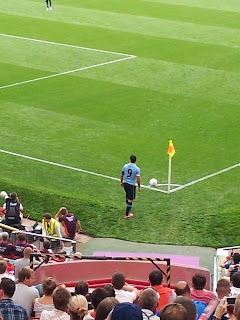 A great opening game, and GB up next – superb! Or so we thought. The teams emerged to raucous applause with the national anthem belted out by 75,000 supporters. 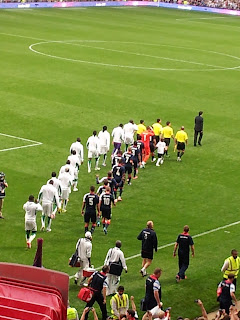 The display on the pitch however didn’t quite match the enthusiasm from the terraces and, even when GB went 1-0 up, the crowd were subdued by the performance of the team. As the game toiled on, Senegal came more and more into a game only sparked into flickers of life by some robust challenges. In the end, Senegal got their equaliser which they thoroughly deserved, to take a little of the shine off a great days football. 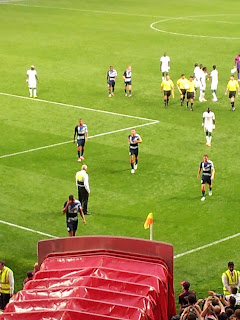 So our one and only experience of an Olympic event has passed and overall we have to take our hats off to the London 2012 organisers. However, on a totally non-sport related note, we would have to complain about the lack of refreshments on offer. Maybe this was unique to Old Trafford, but we were told in a leaflet from the Olympic organisers that we would be able to fill empty water bottles once inside the ground, and that there would be an array of healthy food on offer to fill our hungry bellies.

Well, there was no free water (unless you fancied filling your bottles up in the loo!) and as for food, well if your idea of a healthy food choice is a soggy sausage roll at £2 a pop then you would have been in luck! Hardly the kind of fare that The Olympics should be offering. Anyway, food complaints aside we had a great day and most importantly, the little Tnfivers LOVED it! Especially the Mexican waves!

Now I think it's fair to say that most people's idea of a good Sunday morning does not consist of donning a couple of Flintstones costumes and hauling themselves along a 10 kilometre circuit of their nearest city centre. Am I right? Well then, you might be surprised to read how enjoyable such a morning can be.

It's the second time we've taken part in the Jane Tomlinson Run For All, the first time was back in 2009, when Mr Tnfive drew gasps from the crowd as he wobbled along in a Sumo Wrestler costume, whilst Mrs Tnfive (yes that's me) just wobbled along. Back then, having done a grand total of 0 practice runs I was extremely pleased to have crossed the finish line in 83 minutes, and also extremely pleased not to have ended up spread-eagled on Briggate having collapsed with exhaustion!

Not one to shy away from a challenge, I jumped at the chance to do it all over again this year. So, having agreed with Mr Tnfive that we would run in fancy dress as Fred and Wilma Flintstone, on the morning of Sunday 8th July we eagerly made our way to Leeds Millenium Square and joined in with our fellow 'runners' as we warmed up to the strains of 'Sexy and I know it'.

At around 8:45am we all began to make our way towards the start line on The Headrow. Music was blaring, the beats were pumping and the atmosphere was electric. The announcer welcomed us all and promptly set about starting a Mexican Wave before inviting us all to take part in a minute's applause for the charities and organisers involved.

During that minute we took the time to think about the reasons we were really there. We weren't just there for a jolly jog or to prance about in fancy dress costumes, we were there to raise money and support the wonderful legacy of Jane Tomlinson.

For those of you unfamiliar with Jane's story, she was an incredibly inspiring lady who battled cancer for many years. In 2000 she was given only a matter of months to live but instead of giving up, Jane went on to complete several incredible athletic challenges including the London Marathon and a full Ironman triathlon. Along with husband Mike, Jane launched the first Leeds 10k 'Run For All' in 2007. Sadly she lost her battle with cancer that very same year. Since her death, Mike Tomlinson has kept Jane's memory very much alive by organising various 'For All' events across the north of England and has raised over £4m.

After the minute's applause the wheelchair athletes and the serious runners set off to shouts and cheers from the crowd, and a few minutes later it was our turn! Nothing to fear I thought to myself as I shuffled towards the starting line. After all, I must have been out for at least four 1k runs over the past three years, so surely I must be at the peak of physical fitness and ready to win the race? Wrong. Let me tell you now, the odd sprint for the bus or a dash to the supermarket BOGOF aisle does NOT prepare you for a 10k run. Oh no.

As we jogged at an even pace up The Headrow I told myself over and over again 'this isn't that bad, you can do it'. The encouraging calls from the gathered spectators only served to cement my optimism. Before I knew it we were past the 1k mark and at that point I told myself 'go on girl, you can keep going 'til the 2k marker'.

The sun was beating down on us (for once!) as we jogged past The Merrion Centre and down past the construction site of the new Leeds arena. By this point my resolve to keep jogging on to the 2k mark was starting to wane. 'Are you ok?' Mr Tnfive asked me. 'Don't ask me if I'm ok!' I said, purely because if I thought about whether or not I was ok for too long, the answer would have been 'No' and I would have stopped! Just as I was really about to lose the will to get to the 2k mark Mr Tnfive said 'Look, there's the 3k marker already'. Well, I could have burst with pride as I explained to Mr T that I had never run that far continuously in all my life. Hoorah, hoorah and thrice hoorah!

As we joined the Meanwood Road section of the course we were starting to flag, but the wonderful public that had lined the pavements kept pushing us forward. There were race marshals and representatives from Macmillan Cancer Support dotted along the route, all of whom gave us bags of encouragement and supportive applause.

Our legs were just starting to tire when we caught sight of some of the wheelchair athletes coming back along the opposite side of the road, heading for the finish in the city centre. Their strength and determination inspired us to keep going and before long we were at the 8k mark.

So how did the costumes hold up? Very well actually! I didn't think it would be possible to run such a distance with a string of white polystyrene balls tied around my neck, but they were surprisingly comfortable. I tell you something though, our outfit choices made our ages a bit of a giveaway - so many small children looked totally bemused as their parents pointed at us and said 'look there's The Flintstones'. One person who definitely recognised us though was Harry Gration, our local 'Look North' news presenter, who shouted 'Yabba dabba dooooo!' as he ran past us. It made my day, so thanks Harry!

As we approached the 9k marker, the end was in sight and it certainly felt that way for our tired out legs. The only thing keeping us going now was the tremendous support from the crowd and the occasional shout of 'Wilmaaaaaaaaaa!'. As we rounded the last bend of the course and headed down the home straight towards the finish, our pain suddenly evaporated and we managed a last sprint for the end. 'We've done it! I can't believe we've done it!' I squealed to Mr Tnfive as we crossed the line. And yes, I shaved 12 minutes off my previous time and came in at 71 minutes...........just ahead of Harry Gration!

If you would like to take part in any of the Jane Tomlinson 'For All' events, please go to http://www.forallevents.co.uk/

To make a donation, please go to: