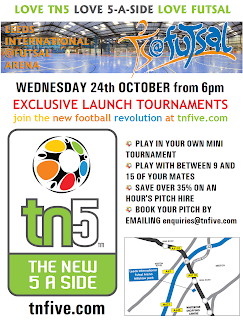 Take advantage of an excellent opportunity to try out Futsal - the only FIFA recognised game of small sided football! Futsal is the game that the likes of Lionel Messi grew up playing, so why not give it a go yourself?
On Wednesday 24th October 2012, www.tnfive.com and @Futsal are offering an hour’s pitch hire for the fantastic price of only £30 – a saving of over 35% on usual prices! The offer is available at the Leeds International @Futsal Arena near the White Rose Centre. Staff will be on hand to provide pre-match guidance and a run-down of the rules, so no previous playing experience is necessary.
All you need to do is email enquiries@tnfive.comwith your preferred pitch time and you and up to 15 mates can play each other in your own mini tournament!

(Pitch hire is payable on the night to @Futsal). Hurry! Availability is limited so book now to avoid disappointment! *

I Tried The New 5 A-Side And I Liked It!

Casual 5 a-side. It's a bit like Marmite. You either love it, or you think it's a total waste of space. Fair enough, after all there are plenty of reasons for hating it. You turn out every week in the wind and rain to be faced with the same scenario: run around non-stop for an hour until you've practically dissolved into a wheezing, panting pool of sweat; watch in horror as your side desperately try to claw back goals as the opposing team steam to a 15-nil victory; and to top it off, you're a man down because one of your so-called 'teammates' dropped out at the last minute to 'babysit' (cheers mate!). Yes, we've all been there, done that and bought the t-shirt.

So, I think I can be forgiven for hesitating at the chance to try out TN5, 'The New 5 A-Side'. I mean, how can it be any different to the 'old 5 a-side'? Surely you can't reinvent the wheel as it were? Well, not one to shy away from a challenge, this season I threw caution to the wind and accepted the invitation to sign up to www.tnfive.com with 15 of my mates and colleagues. Together we formed a 'pool' of players going by the name of TNF (Thursday Night Football).

Unlike 'normal' 5 a-side, TN5 uses a 3-team format - and no, that's not 3 teams on the pitch at once! There are 2 teams on and one off (hooray for the chance of a rest, that's what I say). Games are short and sharp, only 6 minutes in length, or first to 2 goals, then the winning team stay on the pitch to play the team that was resting, erm I mean, spectating. At the end of the night, the team who had the most wins are that match day's winners.

The bit I like best is the fact that each week, all the available players from the 'pool' are randomly placed into one of 3 teams by the 'randomiser' on the website. This means that one week I can be on Col's team (no offence mate but you're a bit crap) and the next I could be on Stu's team - yes that's Stu who was separated at birth from Lionel Messi. All this swapping and changing means that not only do I get to play alongside a different bunch of mates each week, but I also stand a good chance of being on the winning team!

Which brings me nicely on to the league table. Each match day the individual players on the overall winning team are given points which then build up over the season to create an overall TN5 Champion. It's early days yet but I've been on the winning team 3 times so far so I'd like to think I'm still in the running. It does give me the incentive to turn up to every match so that I don't fall behind in the league. However, if my company CEO does insist on my presence at dinner at 8pm one Thursday night I know that one of my mates  from the 'pool' of 15 of us will fill in for me. Great for the team, not so great for me. Joking! I love you really boss!

Seriously though, the 'pool' of players does generally mean that you can get a meaningful competitive game, even if you're a couple of players short. This week for example, we had 3 lads drop out at the last minute for 'babysitting' duties (yeah right, it was raining and probably minus 10 degrees out there!) but the 12 of us who did turn up had a cracking game of 5 a-side using 2 'guest' players from the team who were off the pitch. If that had been a traditional 5 a-side scenario, we would have been completely snookered with 3 men down. With TN5 you can still get a good game even if there's only 9 of you - a 4v4 format with the 9th man acting as ref/guest player - thus eliminating the need for that magic number 10.

The guy who runs our pool of players reckons it's been much easier to organise us lot using the free TN5 website. Luckily for him, the site allows the Manager to post the time, date and venue of the next match day and then it emails all the players in the pool with those details. Then, it's down to us lot to set our availability status for the game so that he knows who's coming down on the night. After that, all he has to do is randomise the teams with the click of a button, and Bob's yer uncle the website automatically emails us to let us know which team we're on and what colour top or bib to wear. Easy.

So, my journey to the top of our 'pool' league table has begun and come the end of the season I fully anticipate being crowned my pool's overall TN5 Champion, and I will plan to celebrate accordingly. Not sure what the rest of them will have to say about that seeing as I'm sure they all reckon they'll be top man too. Well, I'm prepared to fight them for the TN5 crown, so bring it on!

Come down to this brand new arena equipped with Hi-Tech Futsal flooring, electronic scoreboards, changing rooms,  showers and bar area, and try Futsal with your mates or colleagues. Staff will be on hand to explain the rules and get you started, so what are you waiting for? Invite your mates today. Places are limited for the exclusive launch night so act quickly to secure your pitch and benefit from the great discount offer! 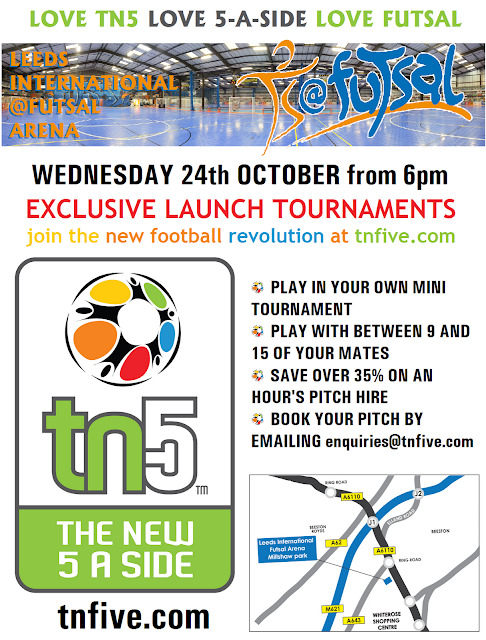